Coronavirus did not stop us or the crypto industry this week! Lots of news from all corners of the world, but first here's how we got on at our first event...

On Tuesday Dan and Ben attended the CryptoCompare Digital Asset Summit event in London. The event was well organised and had full timetable of interesting speakers and panels.

Although attendance was lower because of COVID-19 (handshakes were banned and hand sanitiser was everywhere) we still managed to make a bunch of excellent contacts. We had some great discussions with HMRC representatives too and we hope to build an ongoing dialog with them.

Thank you to everyone who came to say hello, the great speakers and CryptoCompare for running a great event.

The future of cryptocurrency in India

India's Supreme Court has overturned the Reserve Bank of India's ban on cryptocurrency. The ban dates back to April 2010, which barred banks and other financial institutions from facilitating "any service in relation to virtual currencies".

The new ruling Wed 4th March overrules the central bank's stance on the grounds of disproportionality. India's 1.3 billion people will now be able to access a raft of cryptocurrency trading services as crypto startups in the country can now access business banking facilities.

Unocoin, one of the leading cryptocurrency exchanges before than ban, resumed fiat deposits in less than 24 hours after the new court ruling, enabling millions of users to exchange rupees for bitcoin and other cryptocurrencies instantly.

Although the coronavirus is currently disrupting the markets, you can't get away from the fact that 1.3 billion people can now participate in the cryptocurrency market.

"While there were no answers and no new guidance for the industry, the event still represents a step forward for the opaque regulatory agency, which in a decade has only produced two pieces of binding guidance and published some non-binding documents for taxpayers and financial advisors" says Nikhilesh De for CoinDesk.

Hopefully as the IRS gain a better understanding of crypto they will be able to translate their guidance that currently only stands in the form of FAQs into proper legal guidance to give financial advisors and taxpayers more comfort in their reporting.

The new Chrome extension mimics Ledger Live and asks users to enter their 24 word recovery phrase. The attackers then use this to enter the users wallet and move funds in to a different account. A Chrome extension for an offline wallet?...Sounds phishy! Yep, but it was downloaded at least 120 times before it was removed from the app store.

We thought normality was restored after YouTube removed huge amounts of cryptocurrency content at the end of 2019. But this week they seem to be cracking down again with both crypto educator "Ivan on Tech" and news reporter "The Moon" reporting that they have received a strike notice. 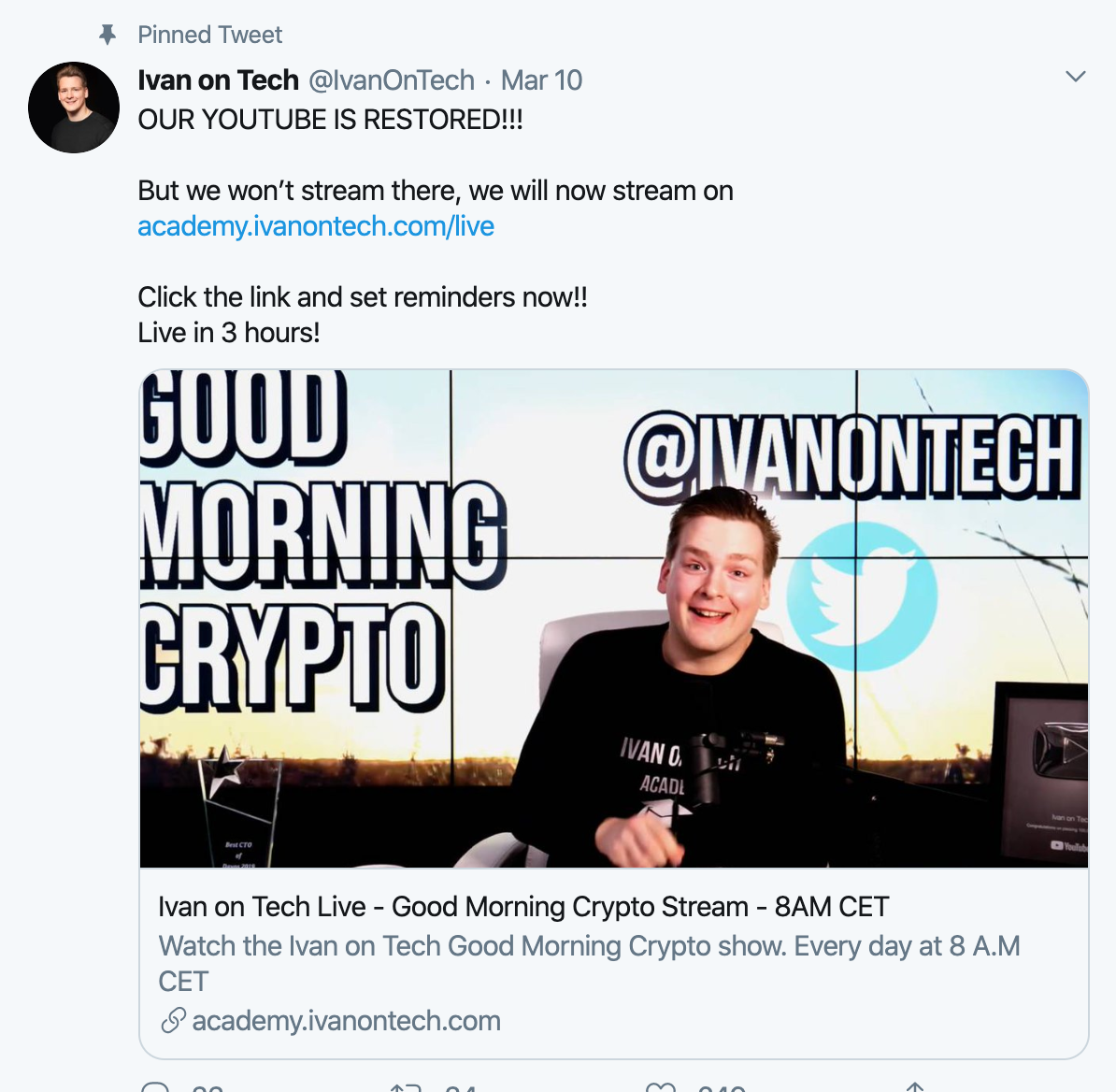 Despite his channel being back up and running Ivan on Tech has tweeted to say he'll be streaming from his website from now on. Let's see if others follow suit...

For anyone with a spare half an hour give this thought provoking CoinDesk podcast a listen. A great conversation about global privacy was sparked as officials in Hubei province tracked potential coronavirus patients by examining purchase records for cough and flu medicine. In this podcast FluffyPony talks to Nathaniel Whittemore about privacy in both a cryptocurrency and a more global context...

It has been reported that in the next few weeks the ATO will be sending out a reminder to 350,000 people about their cryptocurrency tax obligations. Its suspected that they will ask those who traded between 2017–2018 to review their tax forms as well as informing on best practice record keeping for crypto. The Australian tax year runs from 1 July to 30 June and tax forms should be lodged by 31 October. We hope to have support for the Australian crypto market by this time.